As you all know, I am a big fan and supporter of the Weston A. Price Foundation and their high-integrity journal articles. I recently read an article on their website about diabetes, and I found this great information about a sweetener that is not only food-sourced and safe, but also very beneficial. I’ve been seeing this fruit listed as an ingredient in more and more immune blend supplement products and teas. It’s said to provide benefit against some viruses, gut inflammation, lung issues, and aids in the breakdown of stored fat. Read on!

Lo Han Guo, a sweetener that’s good for you too

Lo Han Guo (sometimes spelled Lo Han Kuo) is a sweet Chinese fruit in the cucumber, melon, squash, and gourd family. This fruit, called monk fruit in the West, has the potential to be on a par with stevia as a natural, low-impact sweetener. Unlike stevia, it has no bitter aftertaste.

Lo Han has been used for centuries by local people in southern China as a sweetener and a medicinal herb for the treatment of lung congestion, colds, sore throats, and minor stomach and intestinal problems. Traditional Chinese doctors consider it yin, meaning that it releases excess heat from the body. For this reason, it’s traditionally consumed and served during the hot summer months in China. There’s never been any recorded incidence of adverse reactions to Lo Han fruit or its extracts.

Western botanists “discovered” Lo Han in the early twentieth century, but scientific studies of the fruit didn’t begin until the 1970s. A number of compounds (named mogrosides) were isolated, two of which contribute to the fruit’s incredible sweetness, rated at being between 230 and 425 times sweeter than sucrose.

Like with stevia, the human digestive system is unable to break down the sweet compounds within Lo Han. As a result it does not trigger a rise in blood sugar levels, making it completely safe for diabetics and hypoglycemics. It also helps promote the metabolization of stored body fat. Research has shown that Lo Han extracts help relieve gastritis, constipation and respiratory inflammations, and they also appear to inhibit the Epstein-Barr virus and display anti-carcinogenic properties.

While the FDA has not made any conclusive rulings about Lo Han and its extractives, it is currently assumed to be GRAS (generally recognized as safe) due to its substantial history of safe usage prior to 1958.

Words of caution: as always, read the labels. Many monk fruit or Lo Han Guo products contain erythritol, or inulin, or other substances that are added as extenders. This is OK as long as you tolerate these additives. People who have sensitivities to cucumbers or melons might also have a problem with Lo Han. If you are interested in trying this fruit, either as a sugar substitute or as a tea, please have me check it for you. Lo Han is not cheap, but its benefits are many if it’s the right thing for you.

Lo Han Guo (or Kuo) products are available in Chinese and Oriental markets, health food stores, or may be ordered online. Here are a few sample products (just FYI, not an endorsement): 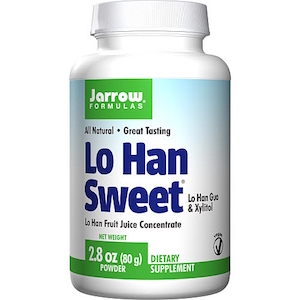